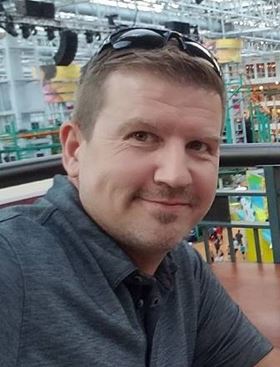 Chad Neil Wojahn, age 47, died Tuesday, August 13, 2019 in Mpls., MN. He was preceded in death by grandparents Severt & Doris (Gunderson) Haugen, and Grandmother Avis (Gaustad) Wojahn.
On Sunday, March 12, 1972 Chad was born to Gary & Marlys (Haugen) Wojahn in LaCrosse, WI. Chad was baptized April 23, 1972 at Cross of Christ Lutheran Church in Houston, MN. Our family moved to Columbia Heights in 1973. Pamela his sister was born two years later. Chad was excited to have a baby sister however after a few days he wanted to return her as she didn’t, “play and have fun” with him. He did become a very protective big brother.

In November 1977 our family moved to our present home in Fridley, MN. Chad loved having his own bedroom, a huge empty basement, and a yard with the sandbox and swing‘s.

Some of Chad’s favorite things were books, cars, trucks, airplanes, dinosaurs, superheroes and going to visit his grandparents on their farms. He attended Fridley public schools and always had many friends. Chad was involved in Boy Scouts and Cub Scouts and was proud to wear his uniforms in school pictures.

Some sports he participated in were soccer, swimming, karate, downhill skiing and wrestling. He enjoyed motorcycles and mountain biking. He was a Star Trek Trekkie and was obsessed with anything Star Wars. Chad spent endless hours creating things with Legos and this inspired him to become a very gifted and talented artist using many different materials. His first job was delivering newspapers at age 14. Chad worked a variety of jobs during his lifetime. He earned an AAS degree in welding, machining and metal fabricating from Dunwoody. Chad also learned motorcycle maintenance and repair on his own time. His true passion was being able to teach others his talent, so in 2014 he began teaching students welding and machining at Saint Paul College.

May 14, 2002 Chad received the best gift in the birth of his son Ethan. They enjoyed movies and building with legos. Chad and Ethan liked attending The Renaissance Festival and going to Valley Fair or Mall Of America. Like father like son Ethan is a High School Wrestler. Chad was such a proud father.

Our family would like to thank everyone for their thoughts and prayers during this time of loss and grieving. We live with the hope and prayer that Chad passed into Heaven eternally and is resting at the feet of Jesus Our Savior.

In lieu of flowers memorials are preferred to the family.

Visitation from 4-7PM on Wednesday, August 21 at Miller Funeral Home, 6210 Highway 65 NE. Funeral Service 11AM Thursday, August 22 with visitation one hour prior at the funeral home. Memorials preferred to the family.

To order memorial trees or send flowers to the family in memory of Chad Wojahn, please visit our flower store.