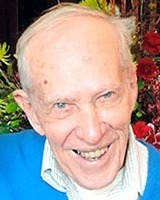 Hayes, Charles William 94, passed away peacefully at his home on February 3, in the loving company of his family. Chuck was born in North Minneapolis and was a 1944 graduate of Patrick Henry High School. At eighteen, Chuck served in the U.S. Army in France and Germany during World War II. After the war, he married his wife Gloria. They settled in Fridley, raised their daughter Melinda, and built a happy life. Chuck was a wonderful husband, dad, grandpa, and friend. We will cherish the love, memories and values he shared with us. Chuck was a humble man who accomplished much and touched many people. Chuck devoted many hours to volunteering and was always willing to lend a hand to anyone who needed it. Chuck and Gloria were founding members of the Fridley Historical Society. Chuck enjoyed woodworking, golfing, gardening, watching the Twins, and a good cup of coffee. Athletic well into his eighties and always interested in trying new things, Chuck placed as high as fifth in the National Senior Games Table Tennis competition. Well liked by everyone, throughout his life Chuck made new friends of all ages, cultures and backgrounds. Chuck was most devoted to his family; his parents Charles and Anna Hayes, wife Gloria and his three sisters Eleanor, Marjorie, and Marilyn all who predeceased him. His greatest joy was time with daughter Melinda, son-in-law John and his grandsons Nick and Charlie. In lieu of flowers, memorials may be made in his honor to the Fridley Historical Society. We will gather this summer to celebrate a life well lived with family and friends.

To order memorial trees or send flowers to the family in memory of Charles Hayes, please visit our flower store.