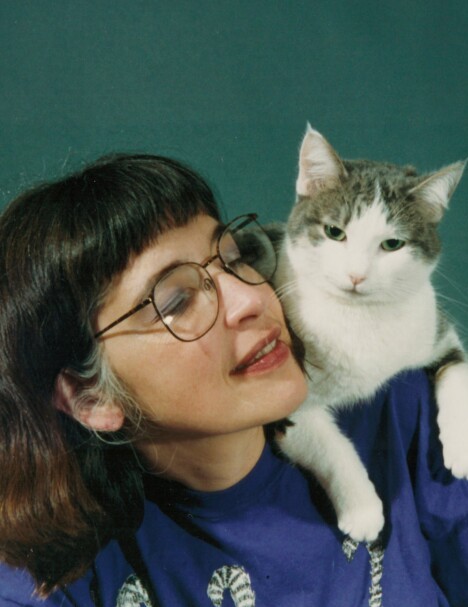 Christine Jo Anderson, 69, of Fridley, MN, passed away on April 14, 2021 after a valiant battle with a nasty lung disease.

Christine was born on December 22, 1951 to Dennis and Marion Urke of Vesta, MN.  She grew up on a farm, surrounded by family and creatures of all sorts.  Her love for animals was fostered by continued rescues of orphaned critters, from Cottontails to kittens.

After attending and graduating from Milroy High School in 1969, she went on to study at Southwest State University in Marshall, MN, where many dear friendships and fond memories were made.

She trained to be a travel agent, and enjoyed it's perks, visiting a long-held pen-pal in England, the fjords of Alaska, and the balmy beaches of Hawaii.

In 1982, she met Dave Anderson, and they wed on September 3, 1983, after realizing he was THE ONE because he showed up for a date with a cat-friendly plant rather than a bouquet of flowers. They went on to be the proud parents of more than two dozen cats.  Together they enjoyed traveling in Dave's private planes to destinations like New York, South Carolina, or just over the Mississippi River for brunch in St. Paul.

For twenty-seven years, Chris worked as the Student Data Manager at Fridley High School where she was often one of the first faces students, staff, and families would see.  With her giant smile and helpful attitude, she made everyone feel welcome and important.  She was often referred to as the glue that held the office together.

After retiring in 2017, Christine spent her time working in her beloved gardens, creating magical fairy and flora worlds.

The family would like to thank the incredible team at Mayo Clinic, who compassionately cared for Christine throughout the last several years.  Additional thanks to treasured family and friends for their prayers and support throughout her illness.

Christine requested memorials be sent in her name to The Wild Cat Sanctuary.

To order memorial trees or send flowers to the family in memory of Christine Anderson, please visit our flower store.
Open