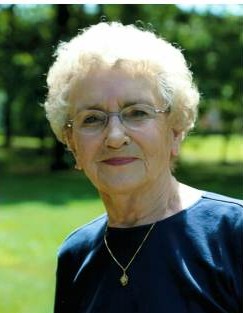 Peterson, Corinne R. "Connie" was born November 1st, 1937 at the Theil Hospital at Bertha, Minnesota to Ruby (nee Anderson) and Roger Rowe.  She attended District 61 Country School, she had the same teacher for eight years and was the only one in her grade. After grade school, she attended 2 years of high school in Hewitt, Minnesota which then consolidated with Bertha High School where she graduated in 1955.  After graduation she attended the Fargo Business College and worked at the North Dakota State University as a secretary in the AG Department.  Being from the farm, it was a perfect job for her.  In 1957 she moved to Minneapolis and worked at Honeywell for nine years.

In 1957 she married Dale Peterson.  They lived in New Hope, in 1972 they moved north to Anoka.  She was employed in Food Services until 1982 working for the Anoka School District.  In 1982 she started working at Zion Lutheran Church as the Food Service Director until 1998 when she retired.  Connie was always a dedicated employee and touched many people with her kindness.

Connie was preceded in death by her parents; sister, Maxine Lorenz.

Connie enjoyed working in her flower garden, traveling, playing cards, visiting with friends, and collecting antiques. Most of all, she loved her grandchildren.

To order memorial trees or send flowers to the family in memory of Corinne Peterson, please visit our flower store.