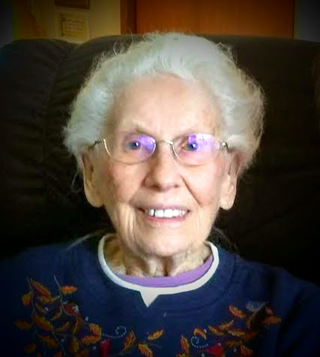 Conde, Elaine Marie (Peterson) formerly of Spring Lake Park, Minnesota, went to her heavenly home Monday, July 5, 2021 at the age of 95. Elaine was a beloved wife, mother, grandmother. She was devoted to her family and to her faith in God.

On the afternoon of April 5th, 2000, as a lost guilty sinner, Elaine trusted Jesus Christ as her own personal Savior. She also received confirmation from the Word of God, the Bible, that she was in fact saved and born of God. She was preceded in death by her husband of 50 years, a proud WWII Marine, John Marlin Conde. Elaine grew up on a dairy farm on Little Butternut Lake in Luck, WI. She enjoyed living the country life surrounded by friends and family. She was involved in 4H and as a teen she and girlfriends often rowed their boat to the other side of the lake for a picnic.

She graduated from Luck High School and moved out West where she met John. They were married in 1946 in Barstow, CA and settled in Spring Lake Park, where they raised 6 sons and 3 daughters. Elaine resided on Manor Drive for nearly 70 years. Shyness did not stop her from supporting her husband, John, in his commitment to fulfill his civic passion for the City of Spring Lake Park for more than 30 years as councilman and acting Mayor. Some of the very first council meetings were held in their home on Manor Drive.

Being surrounded by her family was one of her greatest pleasures in life. She was a great cook and enjoyed vegetable and flower gardening. She and John spent much time traveling the country and abroad after his 34 years with the Milwaukee Railroad.

To order memorial trees or send flowers to the family in memory of Elaine Conde, please visit our flower store.