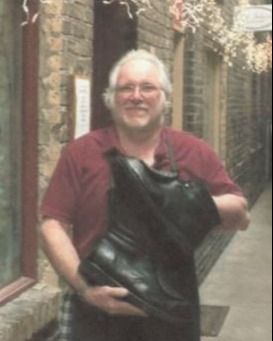 James Neal Picard was born on September 21, 1956 to Richard and Patricia Picard in Pontiac, Illinois, but spent most of his formative years in Crystal, Minnesota.

He graduated from Armstrong Senior High School in 1975, then went to North Hennepin College and earned his Associates degree in Business. During college, he worked in Baker’s Shoe Department. His work transitioned to the University of Minnesota Campus at the Campus Cobbler, where nearby he befriended the original Eddie’s Shoe Repair owner, also in Dinkytown. When Eddie retired in 1987, Jim took ownership and mastered the art of shoe repair these past 35 years. He became known as an expert in Birkenstocks along with his skilled artisanship and attention to detail.

Jim took pride in everything he did. When he wasn’t working he could be found bowling, playing foosball, tending to his raspberry plants, fishing or working on his fishing boat. He got his passion for bowling from his beloved wife and shared that passion with his two sons.

Jim is preceded in death by his parents. He is survived by his wife, Marcia; sons, Zachery (Brittany) and Jerome; granddaughter, Adella; siblings, Rick (Jean), and Linda (Tom); and many nieces and nephews.

Cremation services by Miller Funeral Home in Fridley, Minnesota with a Celebration of Life to come at a later date with location to be determined. In lieu of flowers, donations can be made to Bluegrass Saturday Morning on Jazz88 FM.

To order memorial trees or send flowers to the family in memory of James "Jim" Picard, please visit our flower store.