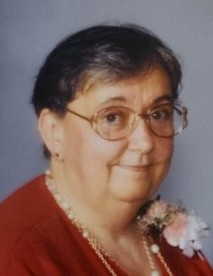 Janet Mary Riedle passed away Monday July 27th, 2020 in Fridley, Minnesota. Janet was born on September 20th, 1938. As a child she loved to spend time with her grandmother and enjoyed sports. Janet married John Riedle on August 13th, 1955 at the Cathedral in St. Paul, Minnesota. She spent the first years of her marriage traveling with her best friend JoAnn, while John was in the service. They bought their first home in 1961 in Saint Paul Park, Minnesota. After 9 years of marriage in 1964, John and Janet adopted Gregory John Riedle. In 1966 Debra Mary Riedle was adopted and in 1968 Richard Peter Riedle was adopted. Not long after adopting Richard, Janet found out that she was pregnant. Julie Ann Riedle was born in 1969. Janet stayed at home with the children and did daycare for the neighborhood kids. In 1978 they moved to Chisago City, Minnesota. In 1987 Janet and John moved to Maplewood, Minnesota where they resided until 2002. Since then they have enjoyed living in senior communities.

Janet enjoyed baking and creating something new out of the things she already had. Her favorite dessert phrase was “I want an Auntie Jo size piece”, which she always knew would result in the counter offer of a much smaller piece. Janet really loved her sweets! She loved to keep the traditions that her grandmother had and was always telling her grandchildren to pray to the blessed Virgin Mary when they were having troubles. Janet’s real joy in life was her grandchildren Alyssa, Amanda, Trystan, Christina, Misty, Katelyn, Kyle, Brandon, Johnathan, and Joshua. She loved to play different board games and card games, often getting slightly competitive, mostly with John. Janet loved to poke fun at things. Any time she was out to eat, she would pull the end of the straw wrapper off so that she could blow the rest at you. She always found ways to make things fun. Janet loved to spend time with family and always lit up a room. She will be greatly missed by all that knew her.

To order memorial trees or send flowers to the family in memory of Janet Riedle, please visit our flower store.