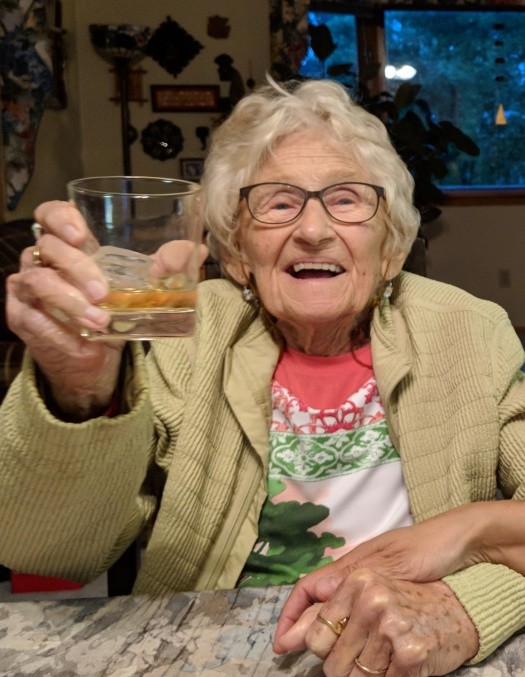 Margaret W. Tjosvold (1918-2018).  She was a savvy businesswoman but never read a financial statement.  She hired lawyers but never read their legal documents.  She gave us direction but was never bossy.  She displayed all of her emotions but never raised her voice.  She would give people kisses but didn't know their names.  She had high standards but never complained.  She was always worried about how to pay but never worried about how she would get paid.  She was a comedian but never rehearsed a punchline.  She loved cooking for a large party but wouldn't eat herself.  She didn't like some foods but would enthusiastically announced that "you might like it".  She cheered at sporting events but never knew the score.  She was photogenic but never used a camera.  She would forget your disability but remember your smile.  She was always surprised when something bad happened but never surprised when something good happened.  She reminded us to "take care" at the hospital but she was going into surgery.  She would travel to the ends of the earth to see you but would be happy if you only sent a postcard.  She had friends all over the world but she lived on the same block in Coon Rapids for 40 years.   She told us we couldn't have everything but she gave us everything.  Tonight have an E & J brandy for Margaret.  One is good but two is even better!  Margaret was preceded in death by her parents, Albert & Rosa Williams; sister, Agnes Mallery; brother Gayhard Williams.  She is survived by her loving family; daughter Mary Tjosvold; sons, Dale & Dean Tjosvold; grandchildren Jason, Wesley, Lena (Ben Barclay), Colleen. Also survived by nieces & nephews, great nieces & nephews, and many friends who became family.

To order memorial trees or send flowers to the family in memory of Margaret Tjosvold, please visit our flower store.