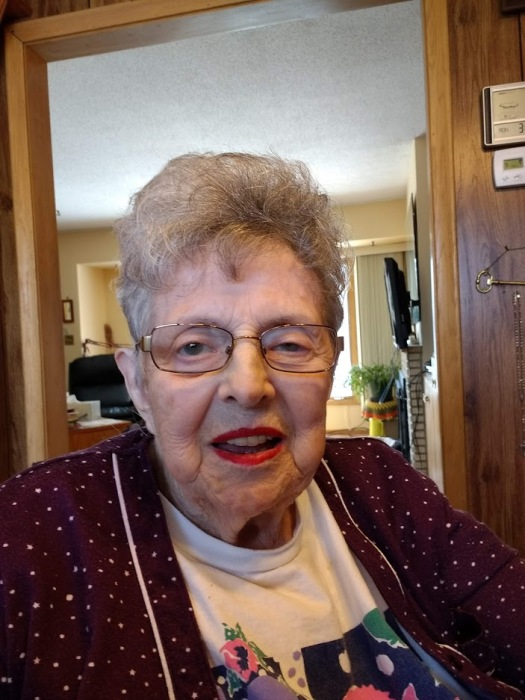 Ramona Aileen LeFebvre Ziegler was born near Mora Minnesota, June 3, 1928, and died at her home in Fridley, Minnesota, May 8, 2019, at the age of 90 years, 11 months, and 5 days, surrounded by her family. Ramona grew up on the family farm in Comfort Township, the third daughter of Charles and Marie LeFebvre. She attended a one - room grade school, and graduated from Mora High School in 1946. She found the love of her life in April, 1943, at the age of just 15, when she was introduced to Donny Ziegler by her sister Mary Ellen, and Don’s brother Jim. Don says that after meeting Ramona, none of the other girls never had a chance. They have been inseparable for the past 76 years, and celebrated 71 years of marriage last November. It was Don’s fierce love for Ramona that enabled him to care for her and keep her at home as her health declined over these past few years. Ramona and Don have lived in the same home in Fridley for the past 63 years, where they raised six children, Michael, Thomas, Kathleen, Joseph, Timothy, and Julianna. Some of the things they tried to teach their kids was to listen to people, and hear what they have to say. If you disagreed, so be it, but that didn’t mean the other person was stupid -- just that they saw the world differently than you did. And her favorite color was PINK, PINK, and more PINK. Ramona had a keen interest in world affairs, and was very well read. She could discuss politics with anyone, and kept abreast of all the latest news. Her love of reading was matched by a love of writing, and she wrote many articles that were published by various newspapers and magazines. She also provided jokes and on-air material for several local radio hosts. Her love of writing led her to take a correspondence course from the Palmer Writers’ School, and she could often be seen at the typewriter at her desk. Ramona was a gracious hostess, and in the early days of Saint William’s Parish, she reached out to all of the priests that came to help the fledgling church, hosting them in her home countless times. She and Don were involved in Saint William’s Discussion Club groups, developing lifelong friendships along the way. Her selfless spirit led her to volunteer for visitation at Unity Hospital, and she could be seen cramming two or three other Saint William’s women into her Pinto Wagon for weekly patient visits. She was an incredible gardener--she developed extensive rock gardens and plantings at her second home near Isanti, Minnesota. She knew the names of all the plants, and frequently gave gardening advice to her children, and anyone who would listen. She was perhaps the greatest garage sale shopper that ever lived, providing clothing and other goodies and treasures for her children and grandchildren. She was easily able to fill two houses with the spoils of her garage sale conquests. Ramona was an accomplished seamstress, who made her own clothes, and often those of her daughters as well. In her later years, she enjoyed the friendships she made at Fridley Senior Center luncheons. Her declining health over the last several years gradually found Ramona confined to her home, where she lavished attention on Paddy, her beloved and loyal puppy. Ramona was preceded in death by her son, Thomas (Delynne), daughter-in-law, Mary Beth, and grandson Josiah. She is survived by her beloved husband Donald, children, Mike (Caryn), Kathy (Paul), Joe (Nancy), Tim (Michelle), and Julie (Kevin), 19 grandchildren, and 25 great grandchildren, and many nieces and nephews.

To order memorial trees or send flowers to the family in memory of Ramona Ziegler, please visit our flower store.