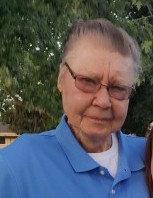 Born in Minneapolis, MN on January 11th, 1940 to Asher and Hilda Haro.  Richard attended Sebeka High School.  On September 26th, 1964, Richard married Carrie Anna Senzek in Williams, MN.  Richard and Carrie settled in Minneapolis to raise their family.  Richard worked in construction as a Union Laborer. After retiring from construction, he drove a semi truck for 10 years, until he fully retired and moved with Carrie to Williams.

Richard enjoyed restoring tractors and woodworking along with following NASCAR and spending time with his children, grandchildren and great grandchildren.

Richard was preceded in death by his parents Asher & Hilda, brother David and stepson Rodney Senzek.

Richard will be missed by all who knew and loved him.

To order memorial trees or send flowers to the family in memory of Richard Haro, please visit our flower store.