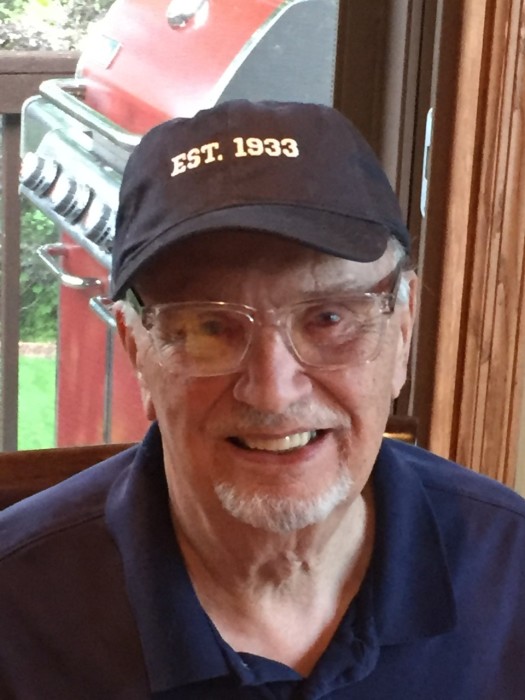 Dick was born August 2, 1933, in Minneapolis, Minnesota, and grew up in Columbia Heights.  He was always a hard worker.  His first job was working at a truck farm at the age of nine, followed by doing a paper route at age ten.  He then returned to working at the truck farm the next year, until he was fifteen.

During his Sophomore year at Columbia Heights High School, his parents purchased Angler’s Rest Resort on Trout Lake, part of the Whitefish Chain north of Brainerd, Minnesota, where he was always there to help.  He then changed schools, attending and graduating from Pequot Lakes High School, where he earned a Varsity Letter playing basketball.

After graduation, he returned to Minneapolis to seek employment.  His artistic talents led him to his first job, working at Typist Letter for a year, which later led him to be hired at DieCraft Company, making steel-rule cutting dies.  Proving his strong work ethic, he became a First Partner, and eventually Owner of DieCraft until his retirement in 1994.

He married Muriel Janke in September, 1955, shortly before he was called to duty with the US Navy.  They were wed at First Lutheran Church in Columbia Heights, where they were members until 1968.  Dick served his stint in Kingsville, Texas, finishing on the U.S.S. Mount Baker.  He was able to bring Muriel to join him, where they both worked on the base in Kingsville.

When they returned to Minnesota, they purchased their first home in Fridley and have continued to live in Fridley ever since.  This is where they raised their family, having three children, Kris, Joel, and Sandy.  During that period, they transferred their membership to St. Philip’s Lutheran Church in Fridley, where they still remain active members.  Dick took the Bethel Bible Series, then teaching it to the confirmants for several years.  He also volunteered as an usher,  greeter, and as a server at Sharing and Caring Hands with the St. Philip’s team.

After the years he spent with his parents up North, Dick had a deep-rooted draw and love for the area, and they were fortunate to find their own place.  They first leased, and later bought a cabin in Sandy Shores on Cross Lake, also part of the Whitefish Chain, in 1978.  He shared his love of the lakes with his wife, children, and grandchildren, gathering on weekends in the summer and snowmobiling in the winter.  His daughter, Kris, and family purchased a cabin two doors down and the whole family would pile in, sharing many joys and memories.  He loved teaching the grandkids how to bait, cast, and eventually clean the fish they caught.

His hobbies included hunting, fishing, and gardening, along with doing the daily crossword puzzles from the newspaper.  His passion was being a devoted fan of his children’s, and then grandchildren’s, many sports and activities.  He also enjoyed watching movies and sports on TV … especially his Netflix off his iPad.  Ultimately, though, his family and relationship with God were everything to him!

Peace be with him, and God rest his beautiful soul … he will be forever loved and missed by us all.

Memorial's preferred to the St. Philip's Food Shelf or the American Lung Association.

To order memorial trees or send flowers to the family in memory of Richard Lombard, please visit our flower store.