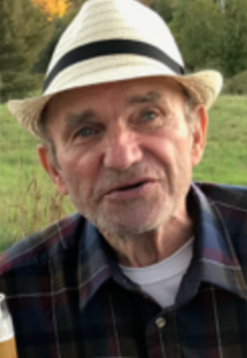 Bob married Jeanette Dalbotten in Minneapolis, MN on October 17, 1953, and they enjoyed 67 years of married life together.  During his career, he owned a drywall business called “Bob’s Drywall” and worked as a contractor, installing drywall for homes and businesses.  He was of Lutheran faith.  In Minneapolis, Bob was a member of Eagles 34 and “The Spirit of 34 Camping Club”.     Bob was passionate about trains.  He loved to travel and over time, made it to each of the 50 states.  He was part of the EZ Riders Snowmobile Club.  Bob coached his daughter’s soccer team and was an avid fan of the Minnesota Kicks.  He enjoyed Polka dancing, loved animals, spoke fluent Finnish, enjoyed time on his pontoon boat fishing, and was an avid gardener, proud of growing his tomatoes.  Bob was known to be quite a prankster.

He is survived by his children, Juleen Lee (Joe) Neil, Gail (Greg Geirke) and Lynn Lizakowski (JR); brothers John, and Lee; sister Betty; 7 grandchildren and 14 great-grandchildren, and many nieces and nephews.  He was preceded in death by his parents, his wife Jeanette, son David Sulander, daughter Denise Poetchke and brothers Emil, Eli, and Eino and half-brothers, George, William, Carl and Walter.

To order memorial trees or send flowers to the family in memory of Robert Sulander, please visit our flower store.